The construction of tidal marshes and river diversions that reconnect the Mississippi River to adjacent estuaries have become core synergistic components of the Louisiana Coastal Master Plan.1 Marsh creation projects are more sustainable when placed near a diversion project that delivers sediment and freshwater, limits saltwater intrusion, or both.2

Two of these aspects come to bear with the West Pointe à la Hache (WPH) Siphon and Outfall Management Project and the Lake Hermitage Marsh Creation Project, in the design of our research objectives. 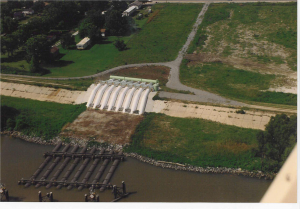 The West Pointe à la Hache Siphon (WPH) was constructed under the Coastal Wetlands Planning, Protection and Restoration Act (CWPPRA) program. Overall, the goal of the WPH siphon was to replace the ecological functions supported by periodic over-bank flooding that occurred prior to the placement of the Mississippi River flood control levee system by including (1) introduction of fresh water from the Mississippi River, (2) increased inflow of sediment and nutrients, (3) reduction and stabilization of mean salinity, and (4) increasing the marsh to open-water ratio.

The WPH siphon was completed in 1992 and includes a discharge pond and four outfall channels that introduce fresh water through a set of eight siphons into ca. 66 km2 (16,297 acres) of open water and brackish marshes surrounding the discharge pond. When all siphons are in operation, flow at normal high water exceeds 56 m3s-1 (2,000 ft3 s-1). The quantity of water flow through the siphons depends on the relative elevation of the Mississippi River. Salinity varies seasonally and spatially due to the river diversions (~0-20 psu).

The RESTORE Food Web Project was designed to include periods of siphon-off and siphon-on conditions for determining differences in the marshes along a siphon induced salinity gradient. This study takes advantage of an Army Corp of Engineers Hurricane Protection Levee Construction Project that prevented siphon operation between 2016 and 2020. Our initial goal was to sample two created marsh sites and one natural marsh site at the Lake Hermitage Marsh Creation Project and three natural marsh sites at varying distances from the  siphon over a three year period (Spring 2018, 2019, and 2020). This would allow us to examine species composition, relative abundances, and food web structure at created and natural marshes with and without the influence of the siphon.  All marshes were sampled in May 2018 and May 2019 when the siphon was closed. The levee construction was completed in 2020 and the siphon was scheduled to reopen in May 2020. However, no sampling occurred in 2020 because of two complicating issues: 1) the freshwater input was not sufficient and timely enough to potentially provide a backdrop for a salinity gradient, and 2) the Corona Virus and COVID-19 epidemic made it impossible to conduct field sampling efforts. Therefore,  sampling during siphon-on conditions is planned for May 2021. 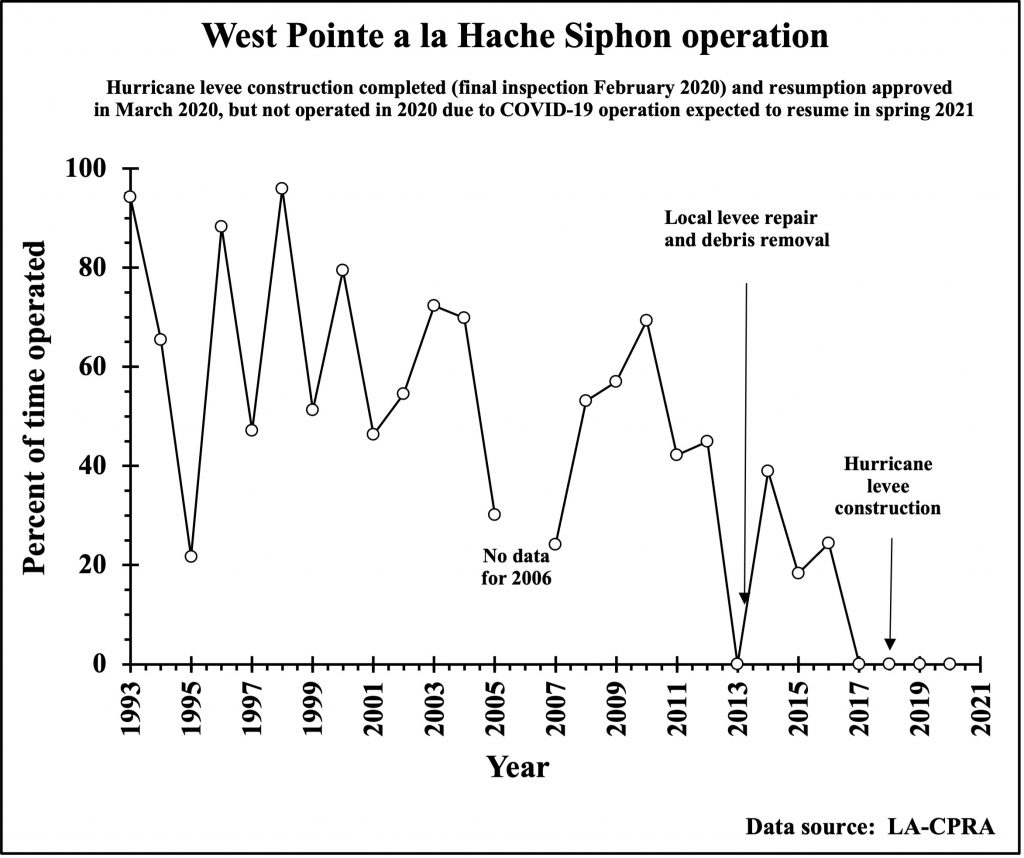 The Lake Hermitage Marsh Creation Project is within the West Pointe à la Hache Mapping Unit which lost 38 percent of its marsh from 1932 to 1990. By the year 2050, 28 percent of the 1990 marsh acreage is expected to be lost. That loss is expected to occur even with operation of the West Pointe à la Hache Siphon (State project BA-04). Significant marsh loss has occurred south and east of Lake Hermitage and along the eastern lake shoreline. Deterioration of the lake rim has exposed interior marshes to the wave energy of Lake Hermitage and increased tidal exchange. Based on USGS land-water data from 1985 and 2006, the project area has an annual loss rate of -1.64%.

The original project features included dredging in the Mississippi River and pumping sediments via pipeline to create 549 acres of marsh. Additionally, 6,300 feet of shoreline restoration using river material and 7,300 linear feet of terraces were included. An additional 795 acres were added towards the end of the project.

The RESTORE Act Food Web project stations (LHC-natural, LHB-created and LHA-created) are identified on the Lake Hermitage site map, along with the direction toward the West Pointe à la Hache siphon.

The project area is located in the Barataria Basin, south and east of Lake Hermitage in Plaquemines Parish, Louisiana near the community of West Pointe à la Hache. 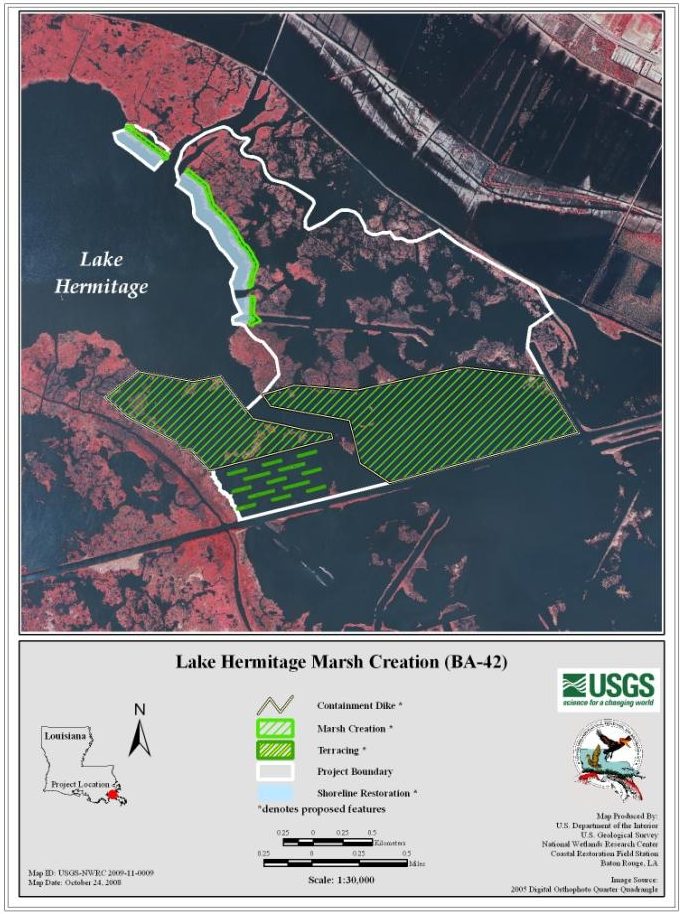 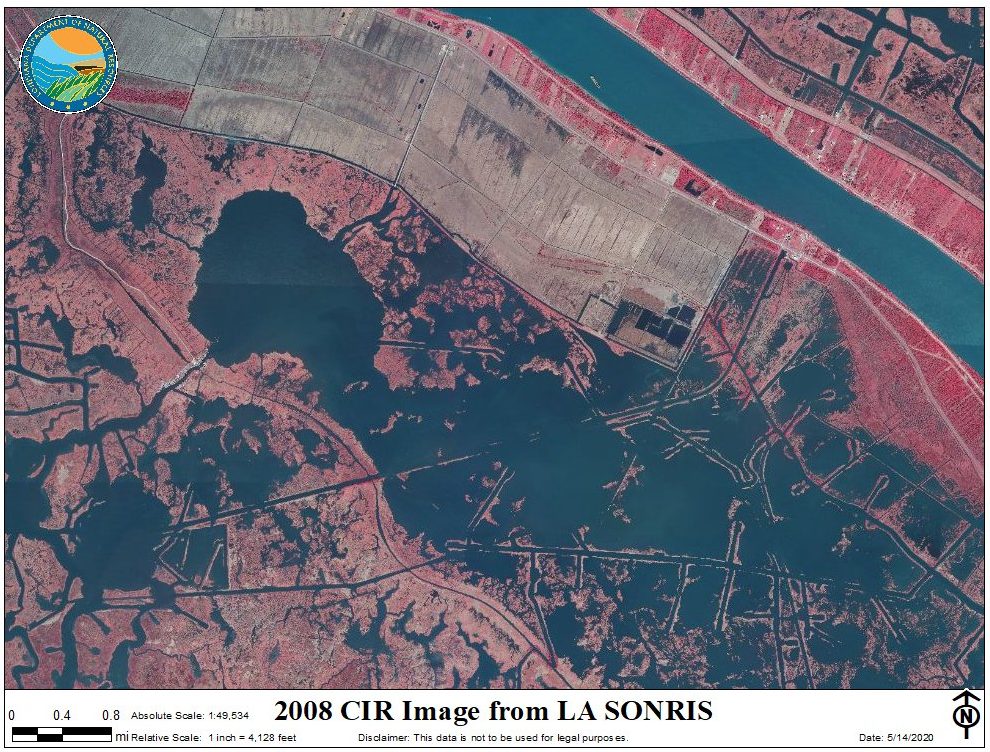 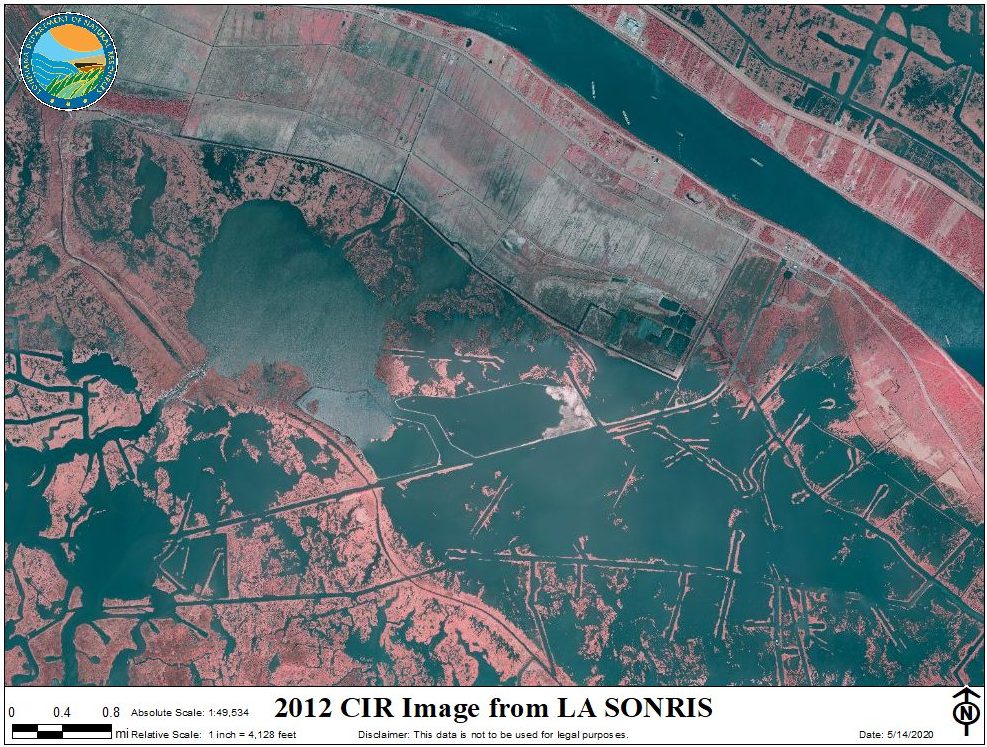 The Louisiana Coastal Wetlands Conservation and Restoration Task Force approved funding for engineering and design in February 2006 and approved construction funding in January 2009. Construction began in February 2012 and was completed in June 2015.