Salt marshes are intertidal vegetated wetlands that are flooded and drained by waters brought in by the tides. They are the interface between supratidal land and the waters of estuaries, where salinity may vary between nearly fresh to marine, and sometimes hypersaline. In the U.S., salt marshes occur on every coast, with approximately half of the nation’s salt marshes being located along the Gulf of Mexico coastline. 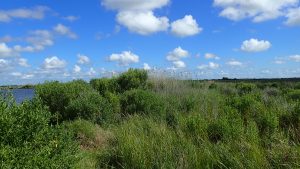 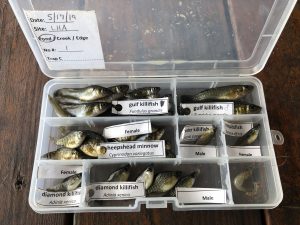 Tidal flux brings estuarine and near-shore fish and crustaceans to the marsh to complete their life histories, while some marsh fish and crustaceans are resident, for example, many killifish and mummichogs and grass shrimp. These marsh species are noted for their hardiness and ability to tolerate highly variable salinity, temperature fluctuations from 6 to 35 °C, low oxygen levels (down to 1 mg l-1), and polluted ecosystems. The more obvious epibenthic species include fiddler crabs of several species, periwinkle snails, Melampus and Neretina snails, ribbed mussels, and paper mussels. Larger animals are alligators, snakes such as salt marsh snakes and speckled king snakes, and the Gulf coast terrapin. Mammals include mink, muskrats, nutria (an invasive species), and marsh rice rats. Larger marine mammals, such as bottle-nosed dolphins, can be seen fishing the shallow shorelines adjacent to salt marshes by forcing fish into the shallow water and capturing them.

Salt marshes are essential for healthy fisheries, coastlines, and communities. They generate many ecological and economic services: 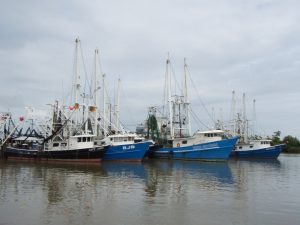 Ecosystem services can be converted to monetary benefits of the existing versus alternative mechanisms to provide the same service ($US), or for those less definable, in terms of what human society is willing to pay for the more aesthetic ecosystem services ($US), e.g., cultural and historic resources.

Salt marshes along Gulf of Mexico coastlines typically experience diurnal tides of 0.3-m magnitude (monthly average), compared to semidiurnal tides in marshes in the northeastern U.S. of approximately 2.5 m. The monthly mean is low in the winter and high in the late summer, with the highest range exhibited at stations in the central northern Gulf of Mexico.

The two-dimensional average elevation across a salt marsh from tidal waters to upland areas is dissected by numerous tidal channels and ponds. Historic anthropogenic ditches were built – to drain the “wasteland” of marshes or to provide for mosquito control or to create areas for forestry operations or agriculture, e.g., for pastures or salt marsh hay areas – and crisscross the natural elevation. More recent, since mid-20th century, modifications to marsh topography in Louisiana resulted from navigation channels and dredging for access to oil and gas resources. These activities resulted in major alterations to the marsh morphology and, therefore, often periods of water inundation from tides that drown these marshes, generate low oxygen, sulfidic conditions in the soil, and lead to marsh deterioration.

The height of Spartina alterniflora, the dominant plant, at least in southeastern Louisiana salt marshes, is affected by elevation, with taller plants found growing in low areas closest to the water’s edge and medium and shorter plants at higher elevations. A variety of other plants, including Juncus roemerianus, Salicornia virginica, Batis maritima, Distichlis spicata and Borrichia frutescens, are typically found in the highest parts of the marsh.

The ability of salt marshes to maintain their position in the intertidal zone depends on the accumulation of organic and inorganic (sediments) materials, which must increase to keep pace with rising seas. The recent 20-year (1997-2016) sea-level rise for Key West FL is 5.6 ± 0.86 mm y-1, which is more than three times greater than the increase during 1917-1936. Recent data for 25 sediment cores across the Barataria Basin from the freshwater to marine end members generated an average vertical accretion rate for the basin of 6.7 ± 1.4 mm y-1. The salt marshes in the Barataria Basin, which are the focus of this RESTORE Food Web Study, accrete at sufficient rates to maintain habitat, should all other factors remain neutral. However, there are many external factors for the Barataria Basin and salt marshes globally, both natural and human-induced, that interact to lead to salt marsh degradation and loss.